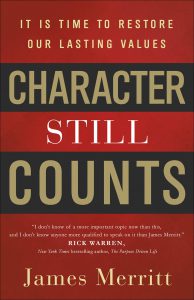 Nuanced Fire. This book is typical of Merritt the Elder’s style of truly nuanced fire – he will not back down on what he believes, but he absolutely understands nuance where applicable. In this discussion of character, he does not negate his own integrity by taking partisan sides, yet speaks to character as the Bible describes it. And when that means mentioning a certain 1990s era US President’s affairs, Merritt the Elder in the very same breath also mentions the sitting US President’s affairs. Full of jokes and various stories – as well as Scripture references – this is as easy to read as listening to one of his sermons either live or (as I often did growing up) on TV. While I don’t agree politically or theologically with absolutely everything here, really the main reason for the 4* rating is the constant use of prooftexting – citing Bible verses out of context. Were it not for my personal crusade against the practice, this would easily be a 5* read. Very much recommended, whether or not you normally agree with Merritt the Elder’s own conservative evangelical American Christian mindset.

*A note on “Merritt the Elder”: One of Dr. Merritt’s sons, Jonathan, is also a Christian Living writer now and has written nearly a handful of books over the last decade or so – and serves as his father’s agent and editor on this project. I grew up outside Atlanta listening to Dr. Merritt’s sermons on TV as we got ready for church, and began reading Jonathan’s books with his 2012 release A Faith Of Our Own. To separate the two and as an homage to the Pliny’s, I use “the Elder” or “the Younger” and have since I first read Jonathan’s works.