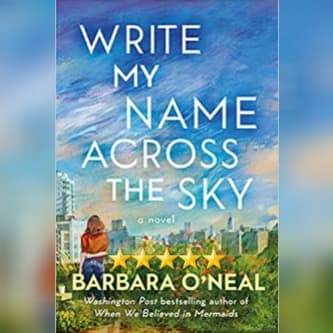 In what is just about the only tradition we have here at BookAnon, yet again Barbara O’Neal has released a new book, and for the fourth year in a row, it is the Featured New Release of the Week on release week. This week, we’re looking at Write My Name Across The Sky by Barbara O’Neal.

Swinging For The Fence… But Not Quite Putting It Over. This was another of O’Neal’s works over the last few years where she is very clearly swinging for the fence in attempting to write a masterpiece that will leave you breathless – which she nailed in 2019’s When We Believed In Mermaids – that doesn’t quite make it over. Ultimately this is a solid double/ stretch triple – powerful and great, but also very clearly not quite what she was hoping for. And honestly, most of that has to do with the ending and particularly the flash-forward epilogue. As at least one other review has mentioned, this could have been better with another hundred pages or so to flesh out that particular area, or perhaps (my own suggestion here) as a duology wherein the resolutions to the varying plot threads are set up, and then executed (with complications, of course) in the second book. Still, truly a solid and compelling read that hooks you in early and makes you want to read all the way through. Very much recommended.